The City of Carentan has paid a dear price for its liberation in June 1944. The American shelling of the City designed to flush the German defenders out of town, first on June 6th but especially in the night of June 10th to 11th, caused horrendous destructions. Later came the sporadic yet regular shelling from German Artillery whose big guns were zeroed into town as late as the end of june 1944. Many inhabitants fell victims of these bombardments. Combats, land mines, air straffing and sheer nazi barbarism would at random keep on taking civilian lives throughout the weeks following the actual liberation. A of today, 65 civilian names, children, men and women have been recorded as killed during the fighting.

And among them, the first citizen of Carentan, its Mayor Doctor Jean Baptiste Caillard, killed by shelling on June 6th on Sibline street. Some families have been hit harshly and cruelly ; The Lamy family lost 7 people in the same June 6th bombardment on rue des Villas in the afternoon of June 6th. Their neighbors, 7 years old Ghislaine and her sister, 10 years old Liliane Leclerc were killed in their home. Emile, Jean, Madeleine and Marie Louise Legardinier, also living rue des Villas lost their lives. For that one day June 6th, 24 inhabitants of Carentan are killed, and the actual fightings for the City have not yet begun. In the early hours of June 12th, Carentan is officially clear of German troops. But the counter attack soon begins in the afternoon and throughout June 13th Jules Durel is killed around 7 O’clock in the morning. His own son Marcel dies a few hours later. On June 23 rd, the population gathers one more time Place de la République for another medal giving ceremony. Two germans 88 shells fall in the middle of the crowd, killing five civilians and wounding 19. Four years old Danielle Laisney was about to give flowers to the soldiers when she is mortally wounded. She dies in the arms of US Medic Bob Wright. She remains the symbol of the sacrifices paid by the City of Carentan. In Pénême, north of the Douve river or within Carentan, the Fortin Family suffers the cruel losses of four of its members between June 7th and July 14th, killed by either shelling or explosives. 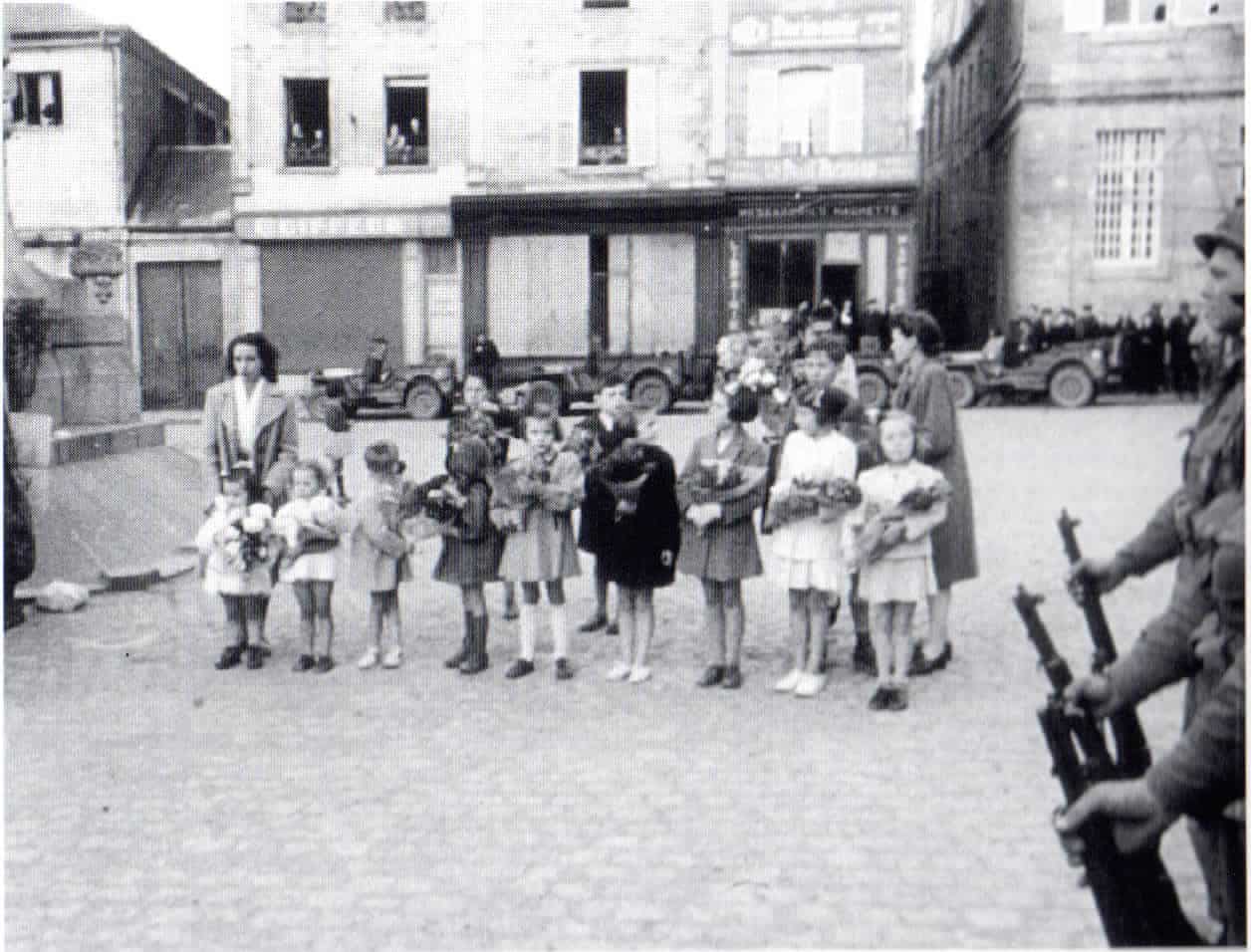 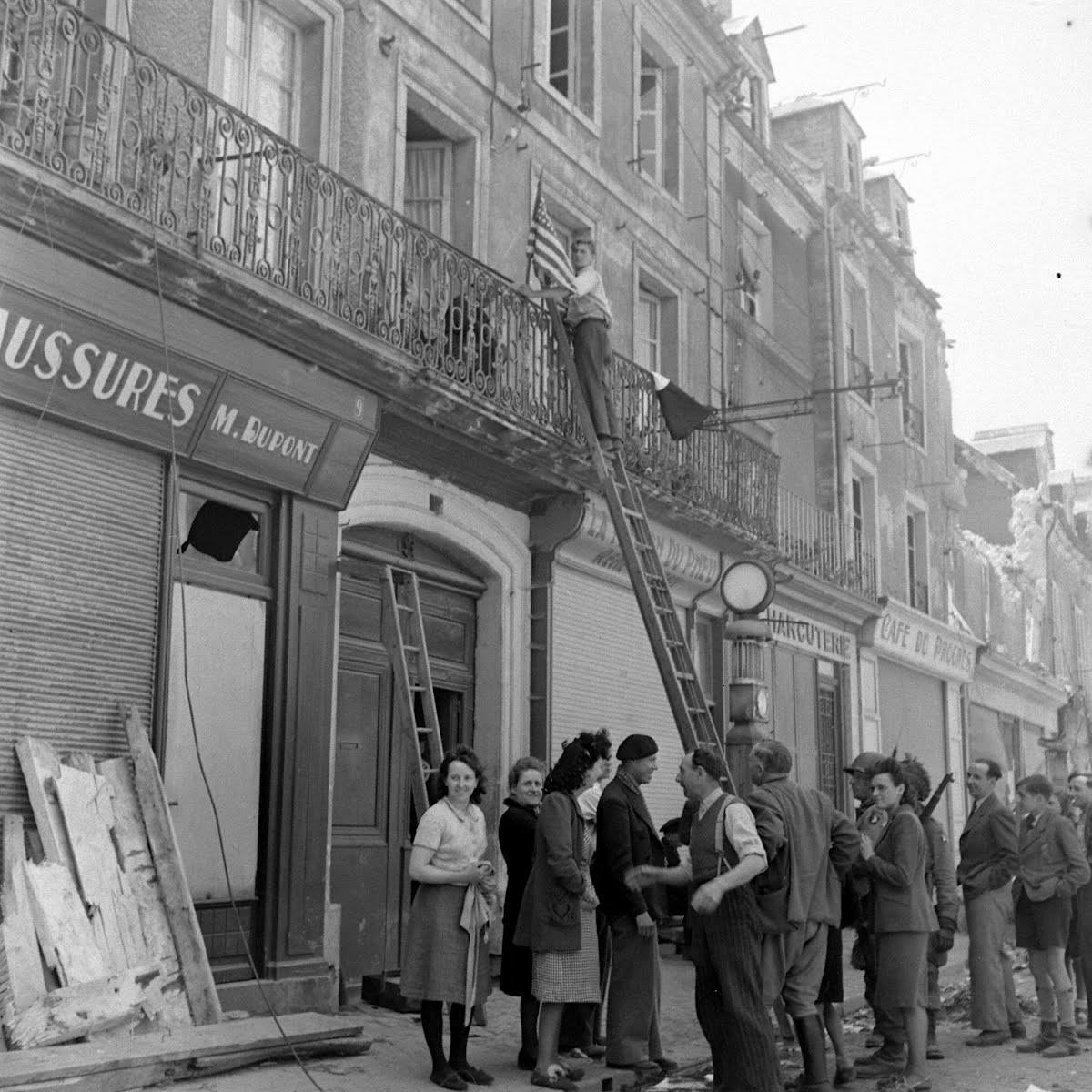 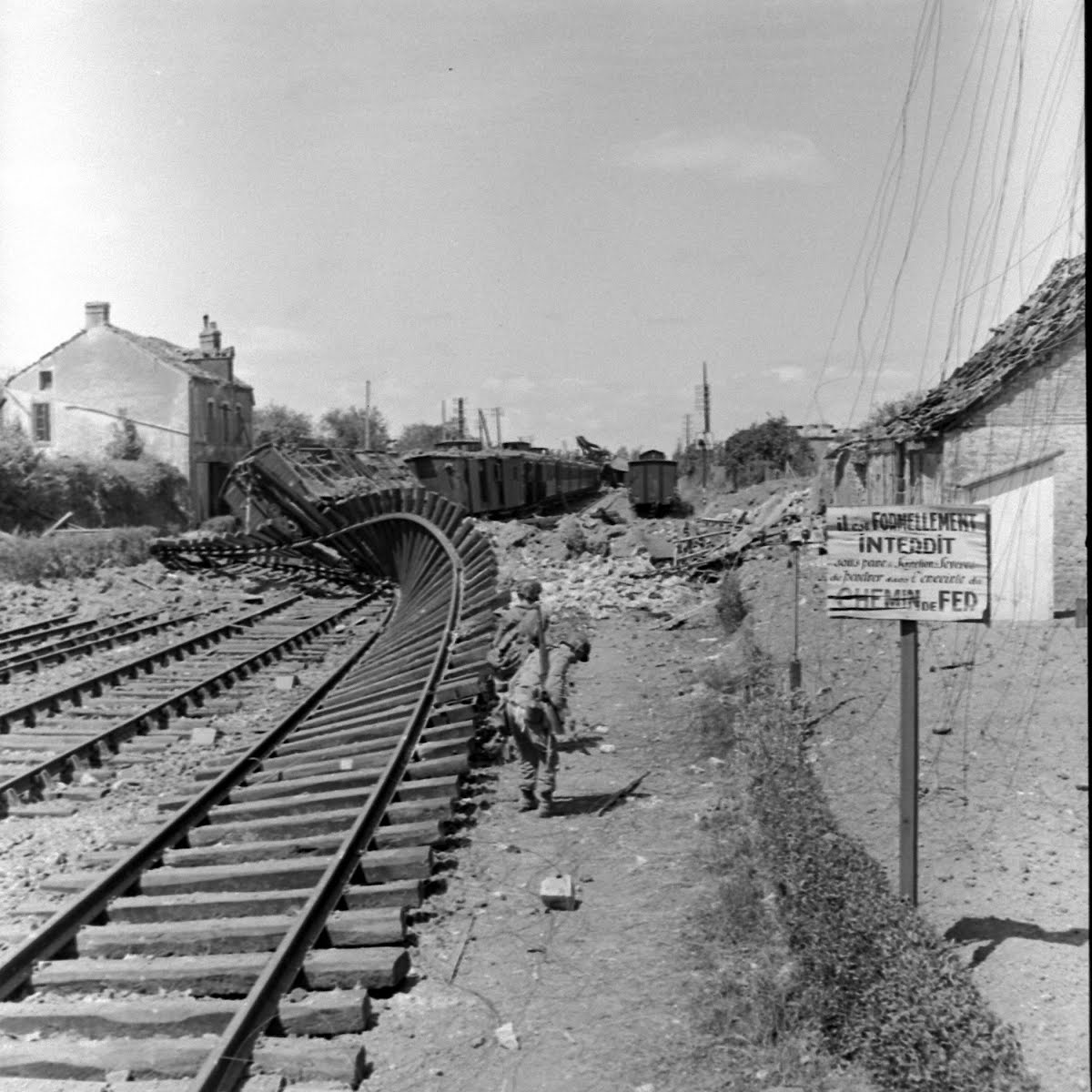 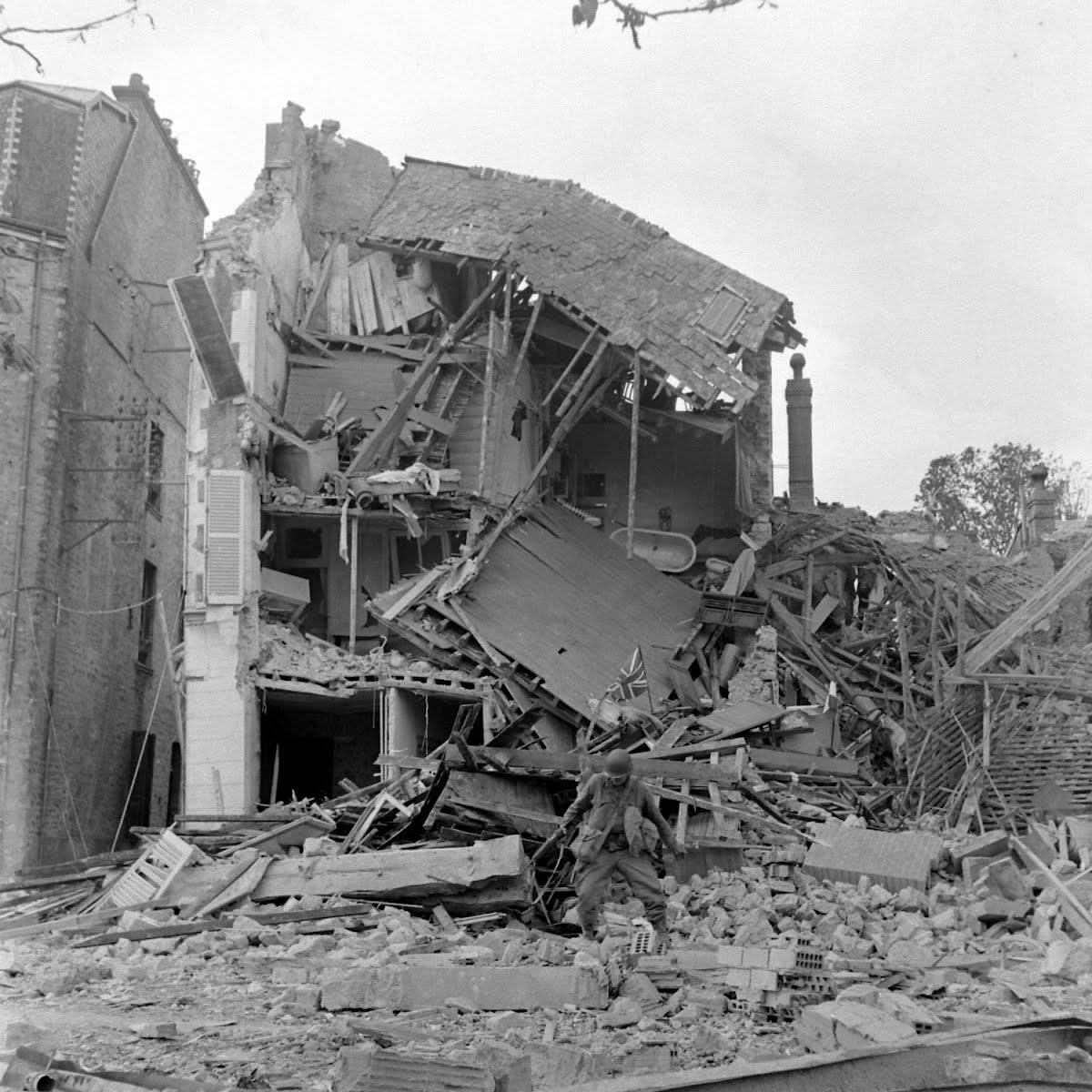 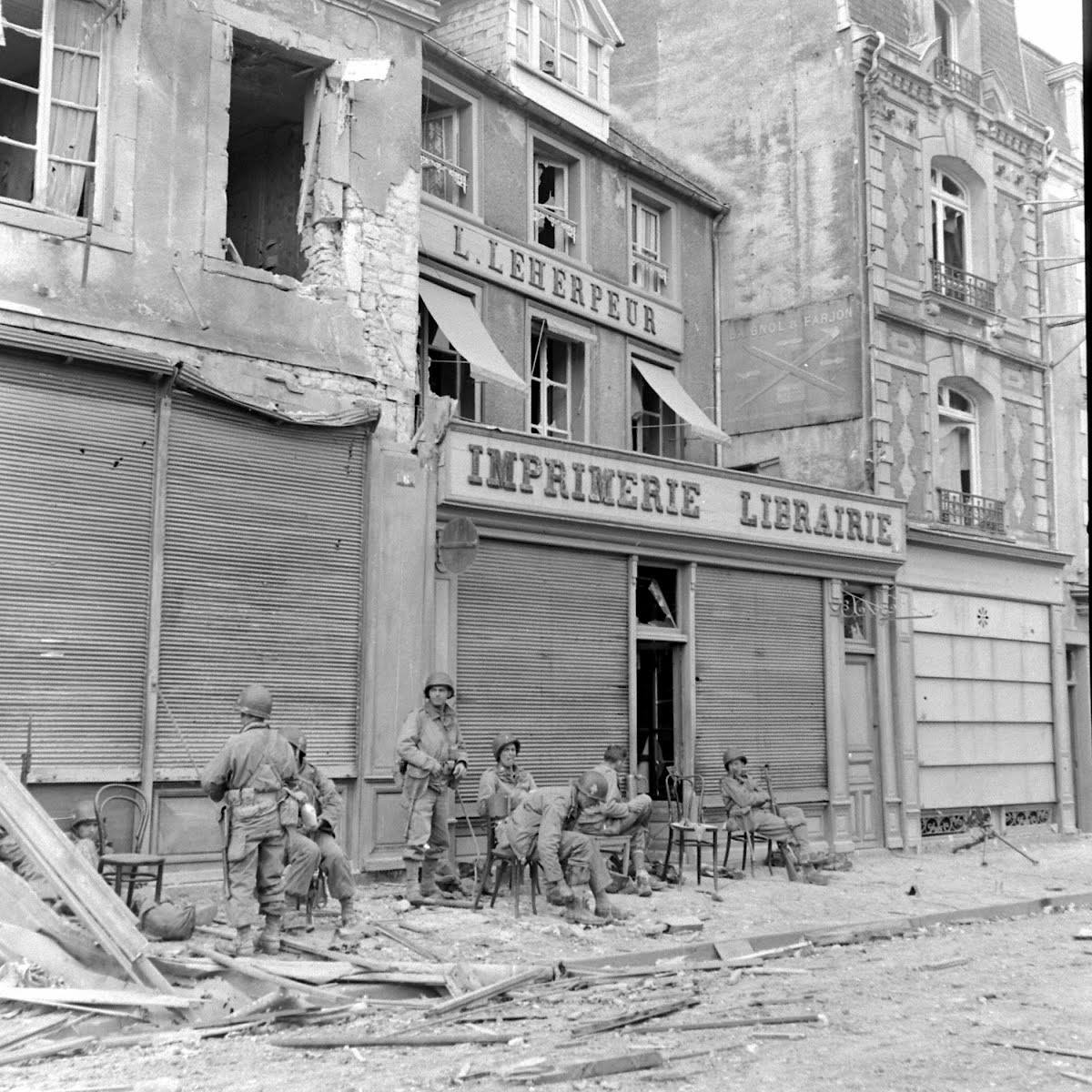 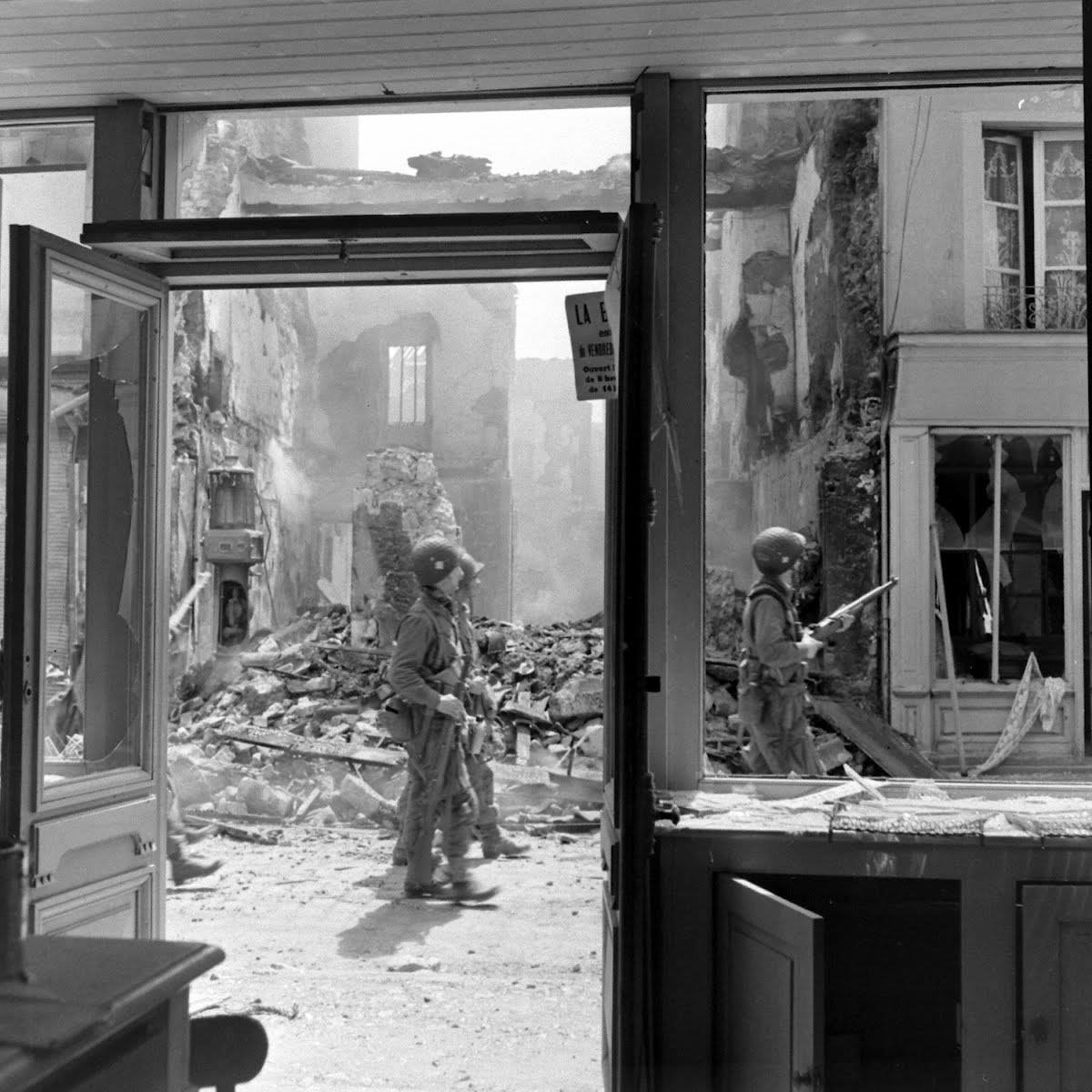 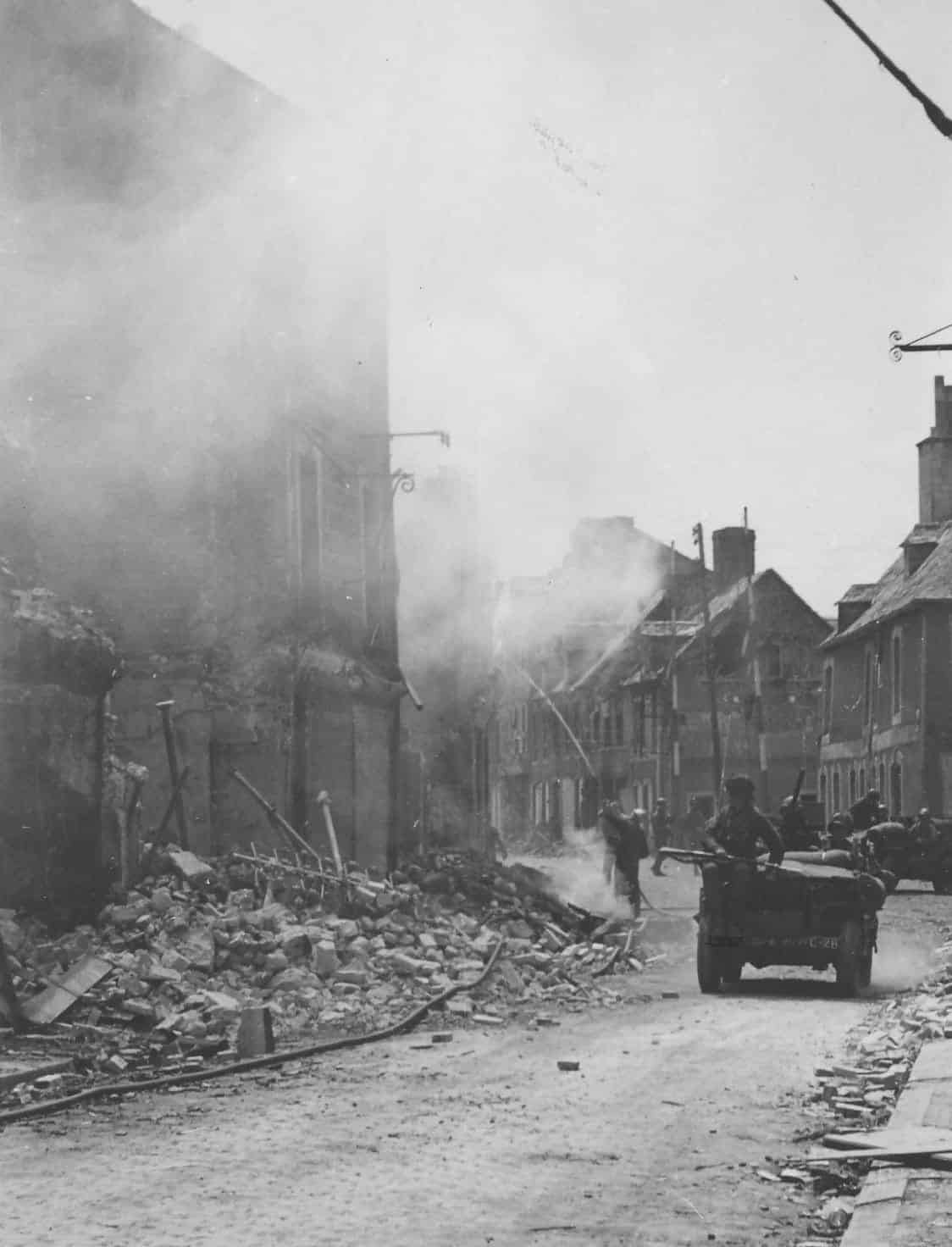 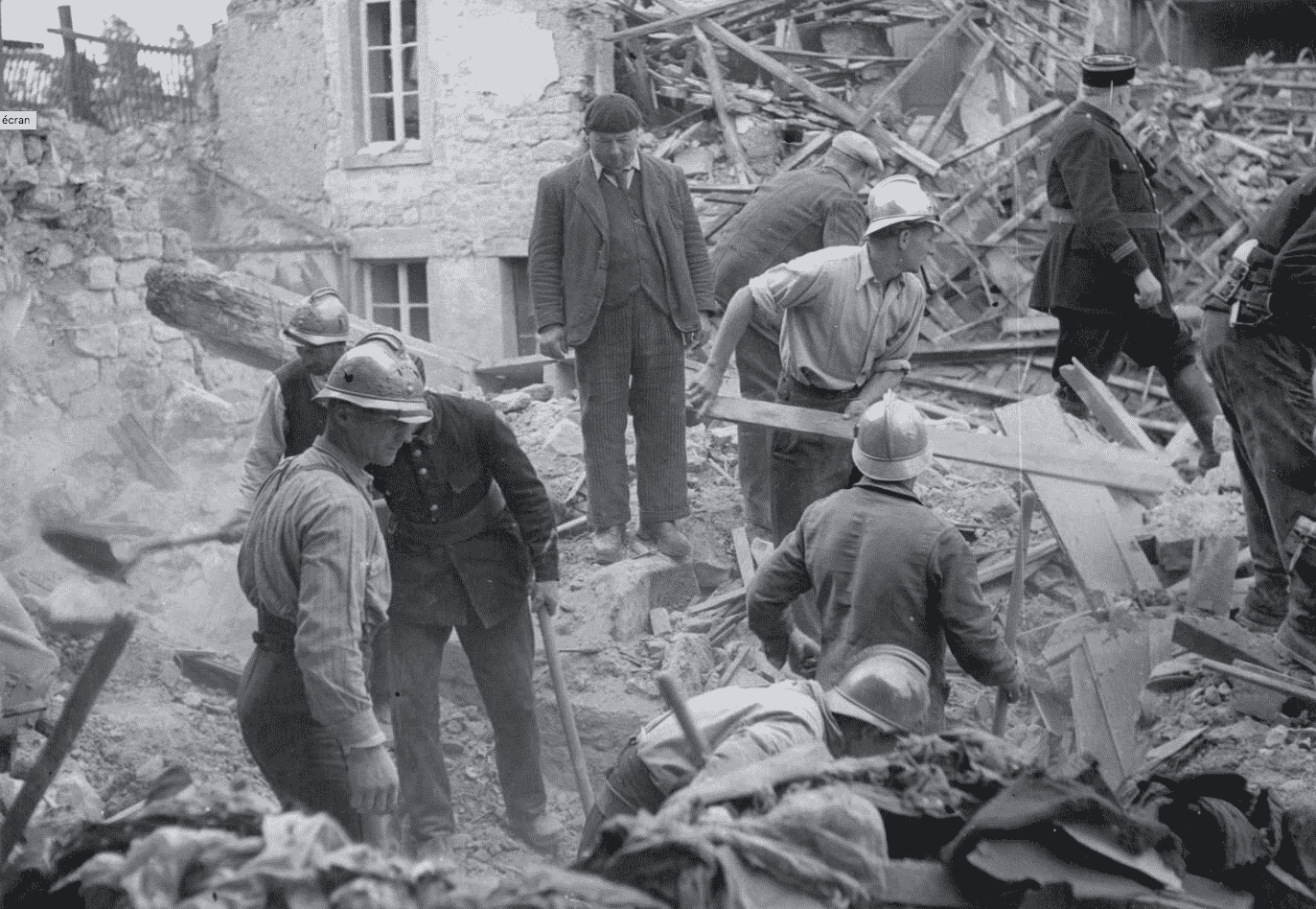 This picture has become world famous and synonymous of the battle of Carentan. Although staged for US Army Signal Corps photographers, it accurately shows the respect and compassion of the people of Normandy for those young Americans who lost their lives for their liberation.

Daniel Potier was a Saint Hilaire Petit Ville City councelor from 1989 to 2002. Here is his story : « In june 1944, I was 6 years old. My family used to live rue du pont (Bridge street), the last house on the left as you face Tucker’s bridge, the US Engineer Major -killed on the Carentan side of the Taute river, opposite the monument. The bridge was blown to pieces by the Germans on June 11th. It has previously been blocked in order to secure a curfew within Carentan. My father, and Michel Le Blanc’s father, were tasked by the Germans to watch over these gates. We took refuge until June 12 in the neighbor’s house, the only house in the neighborhood with a 3 inches concrete floor. We then found shelter in a farm on Mesnil road close to the stream, after a shell went through the roof and landed square on my sister’s pillow. Good thing she had left some 10 minutes before. We were lucky the shell did not set the bed and consequently the house on fire. With my dad, we used to walk to our garden, located next to our house on Bridge street. Some days after the liberation, between June 13 and 16th, I remember vividly this american soldiers lying dead along the highway, on Isigny road at the intersection of Rue du Mont. A few yards further up the road, where house « Vicariat «  used to stand, and where the mayor Mister Albert Lorence used to live, laid a dead German, soldier. These two men most likely faced each other in some duel, fatal to both of them. They both remained there for at least three days. I remember the German body covered with a long black cape. People from Saint Hilaire kept laying fresh flowers on the body of the American soldiers until he was recovered by the Grave Registration personnel.

The picture shows Mr Adjutor Lecanu and his wife Marie. Right across the street, the large 5th General Hospital was set up a few days later. 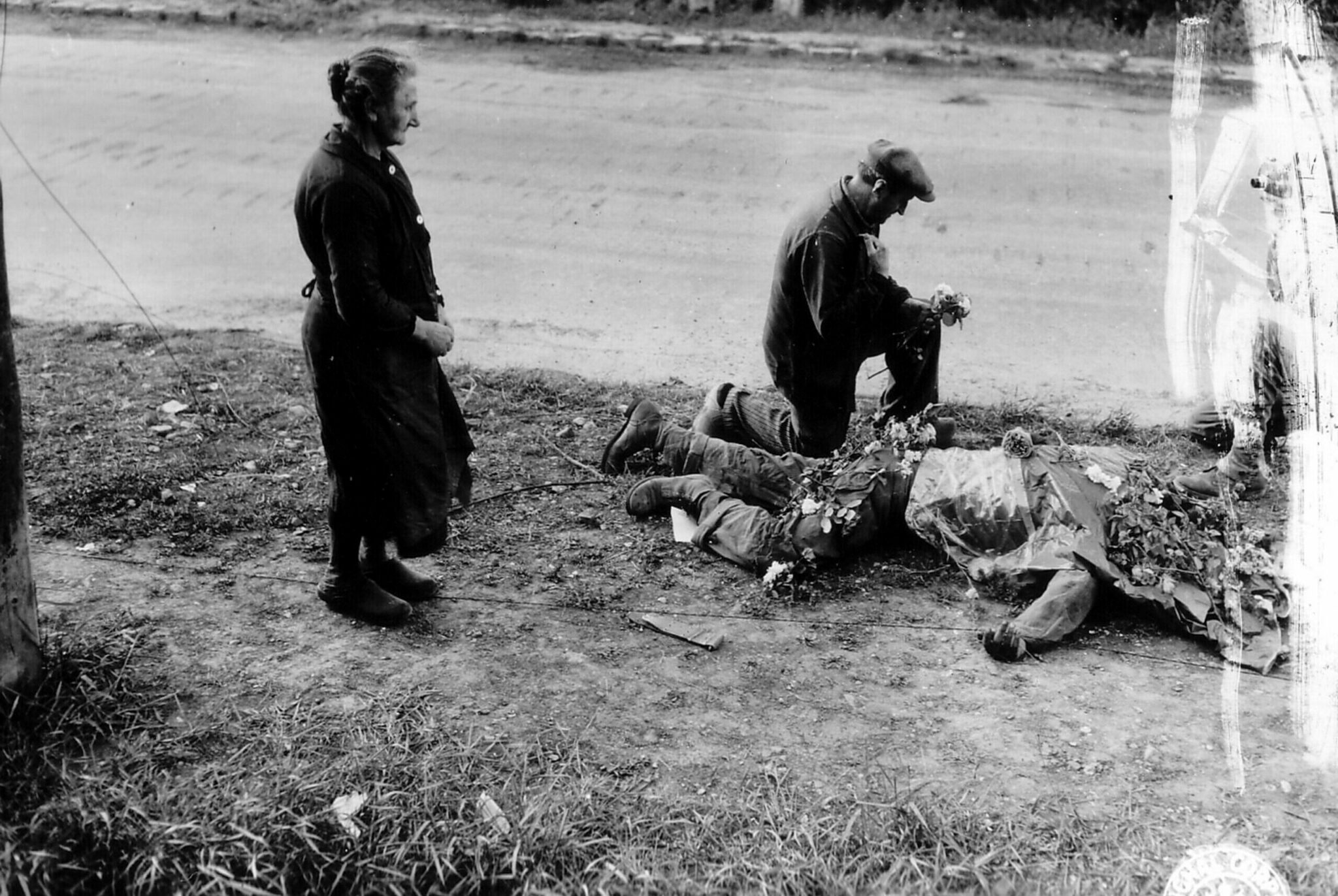